SCT is a “TURBO” type of defrosting system, which is used for different types of meat and fish. This system, as all “TURBO” systems, is characterised by the unmistakable wall-mounted side ducts equipped with truncated cone injectors to distribute air and from the ceiling ducts complete with adjustable air vents for air recovery.

The air distribution and recovery ducts are connected to an ”Air Treatment Unit” that may be installed inside, behind, or above the ceiling of the room.

The power of the heating system is electronically adjusted according to the temperature detected by special probes inside the chamber as well as at the product core and surface. With this system, the defrosting process is implemented gradually without damaging the product.

At the end of the defrosting process, the system automatically maintains the temperature (0;+2°C) by means of a ceiling air evaporator supplied by an external refrigerating unit.

The size and power of the system can be adapted according to the customer’s requirements, thus permitting any type of meat or fish to be processed (chunks of meat, medium sized, etc.)

The high performance of the system is ensured by perfect ventilation inside the room, which guarantees a uniform treatment of all stored products and a detailed control of the parameters desired by the customer, which is obtained by means of a control unit with dedicated software developed in-house.

The heart of the system is an ”air treatment unit” known as ATU, which is composed of:
• a refrigerating section;
• a section of heating supplied by hot water (+60°C), steam or electrical resistance;
• a ventilating section.

The system is also equipped with a humidifying system that allows water to be finely sprayed in the flow channels by means of an Air-Water circuit consisting of special water atomising nozzles, so as to enhance the relative humidity inside the room.

The main function of the ventilation system is based on the continuous circulation of air.

During the ”flow” of air emitted by the side ducts, which are connected to a ventilated section equipped with a regulation flow valve to constantly regulate the intake of air inside it, goes down until it meets the vents that guide it towards the trolleys, forcing the flow to evenly ventilate the product.

During the ”return” phase, air is sucked up by ducts placed over the trolleys and ends its journey by returning to the Air Treatment Unit (ATU) from where it started.

The control system is composed of a power panel controlled by a user terminal with a coloured touch-screen display and keyboard with 7 buttons.

By following the software’s easy instructions, the user may:
• manage and control the whole system as well as monitor the relative temperature and humidity values;
• set the parameters of two different “modes” of operation (manual and automatic) and all the other advanced functions;
• record and visualise the graphic process of various variables (temperature, humidity, etc.); 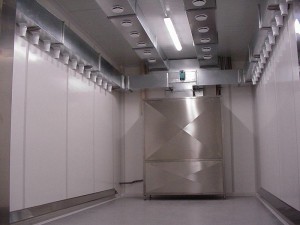